“Alive and clad with trees and herbs and flowers
Earth’s great brown body smiled towards the skies,
Azure replied to azure in the sea’s laugh;
New sentient creatures filled the unseen depths,
Life’s glory and swiftness ran in the beauty of beasts,
Man dared and thought and met with his soul the world.”

E-residency: The programme “Celestial Forest: Astro-logy, Ayur-veda, and Art” is focused on Botanical Art and is available as an e-residency virtually. Participants don’t need to necessarily travel to Haridwar.

Duration: The duration of the programme is 14 days. There is no start or end date; participants can join for any continuous 14 days.

Grants: Two kinds of grants (Merit Grant and Need Grant) totalling to USD 255 are liberally available to each participant. Thus, after these grants, the Net Fee will be USD 645 only.

Methodology: Following are the linear steps to learning and training in this e-residency artist programme.

Creation of art work With the above preparation, a participant is chosen by the relevant tree, depending upon his / her 3 factors relating to birth – time, date, and location. The focal point of the art work is in terms of visual art of a leaf of the relevant tree. Fusion is a necessary aspect. Any other context or flora can go along, as a lower priority, within the same frame. A participant is welcomed to create and associate any other art form to this visual art.

Outcomes. Participants to this e-residency programme become more aware of nature, its auspicious, medicinal, and practical usages, develop a better understanding of the relationship of the plant kingdom with humans and the dependency of the animates on the heavenly bodies. They potentially receive meditative and therapeutic rewards. Art works are created as a destination of this e-residency programme.

Impact. The 27 art works made by the participants will be utilised to produce and publish as a book. Two different colouring books – for adults and children – will also be produced. These are expected to advance the disciplines of fine arts, astrology, astronomy, botany, and divinity. More people the world over will benefit due to this publication.

Follow-ups. A participant can utilise USD 500 (out of the Net Fee of USD 650) as credit and adjust it (conditions apply) against the fee of a residency programme located inside the AZIMVTH Ashram.

Scope: A participant chooses any one of the following three tracks.

God of Tri-Leaves Bilkeshwar Temple in Haridwar where goddess Parvati prayed to Lord Shiva and later married him. Bilva, commonly known as Beil tree, and an English equivalent is wood apple or bengal quince / golden apple / Japanese bitter orange / stone apple. The botanical name is – Aegle marmelos. The tree starts giving first fruits 11 years after planting. The leaves are in clusters of 3. The fruit is considered dear to Lord Shiva. On Maha Shiva Ratri, these leaves are used for prayers.

Rudraksha Tree could be taken up by an artist in lieu of Bilva.

Panch-vati, the Five Trees. Lord Rama and Lord Krishna, the 7th and the eighth reincranations of Lord Vishnu (one of the trinity) are the most commonly revered deities in India. Lord Rama, his wife Sita, and brother Laxman lived in exile for 14 years in a sacred grove having five kinds of trees. Bilva tree is dear to Lord Shiva (the superior amongst the trinity). Vatta is the national tree of India. Peepal is also known as Bodhi tree as after praying for days under it, Lord Buddha received revelation. Every part of the Neem tree – roots, bark, stem, leaves, twigs, and fruits – has medicinal usage. Amla fruit is extensively used in many Ayur-veda preparations including candies.

Lunar Botany: Cube Root & Tree-Trees The ancient scriptures provide for a set of 27 different trees for each of the 27 phases of Moon in a month. There is one (of the 27) specific tree for each individual based upon his / her birth-chart. Taking care of that tree improves a person. The Indian almanac is a luni-solar one. There are more similarities between Western and Indian astro-logy than dissimilarities. There are 12 (Western) Zodiac signs and 12 (Indian) ‘Rashi‘ signs. They are identical in etymology. However, under the Western system, there is a specific Zodiac sign for all persons born in a period of 30 days or a month. The Earth revolves around the Sun in about 365 days. Under the Indian system a ‘Rashi‘ (Zodiac equivalent)is determined based on 3 (not 1) factors – date, time, and location of birth. Moon revolves around Earth in 27 days. And there are corresponding Nakshatras. A Nakshatra lunar mansion is one of the 27 divisions of the sky that the Moon passes through during its monthly cycle. The first fortnight between New Moon Day and Full Moon Day is called ‘Shukla Paksha‘, the period of the brightening (waxing) moon. The second fortnight of the month is called ‘Krishna Paksha‘, the period of the fading (waning) moon.

Each of these 27 trees are planted in 2 different locations, far apart from each other, in Haridwar. The images ( (c) Tarun Kumar) are given below. 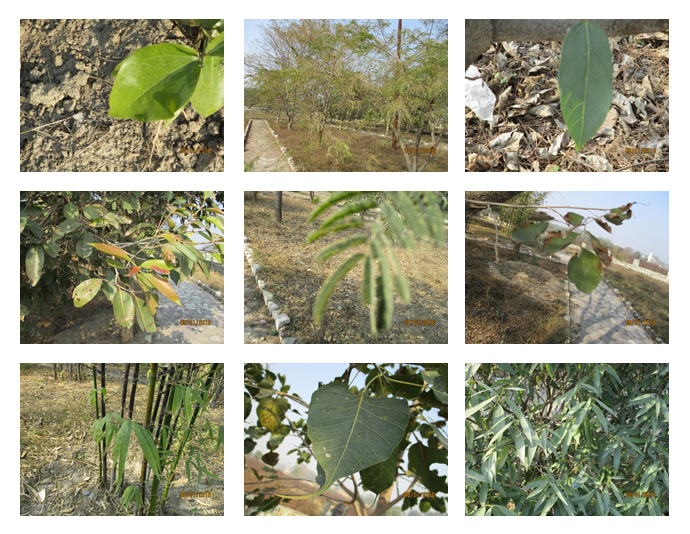 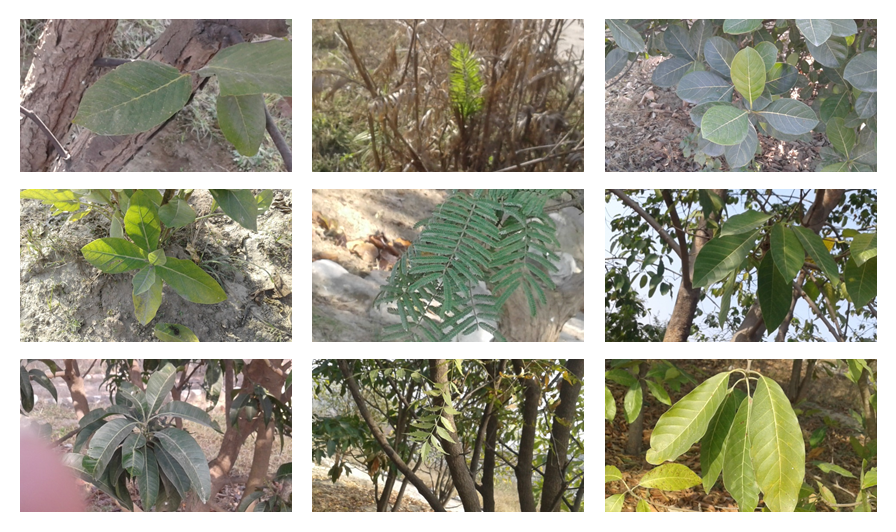 Sushruta writes that he was one of the direct students of Dhanvantari, God of Medicine, who had incarnated himself as a king near the Ganges. Sushruta is also known as the first plastic-surgeon of the world. Sushruta was performing surgeries on human body 1,000 years before Hippocrates and 2,000 years before European stalwarts like Celsius and Galen were even born.

The Sanskrit / Hindi term for ‘medical sciences’ is Ayur-Vigyan, so called with similarity 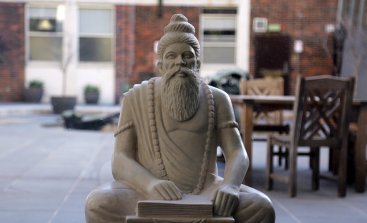 of the word ‘medical’ or ‘life’ with Ayur-Veda. AIIMS, the premier medical university and hospital of India, an Ivy League equivalent, is situated about 10 miles from Haridwar.

Haridwar is considered holy due to the ancient story detailing Sagar Manthan, the churning of oceans wherein both the divine and the demons collaborated. Immortality and health-giving nector, the Amrita, was one of the products that emerged due to the churning. It was God Dhanvantari who emerged with a Kumbha (Sanskrit: pot) containing the nectar. It is his birth day on Dhanteras, two days before Diwali (the Christmas equivalent in North India) festival that is celebrated as the National Ayur Veda Day.

Astro-logy: Vedic mathematics and astro-nomy and astro-logy were related disciplines in ancient India. Brihat Parashara Hora Shastra (Sanskrit: Greater Parashara Hour Literature) is oldest codified book of ancient Indian astro-logy. It was compiled by Guru Parashara, a grand son Sage Vashishtha who was one of the seven Rishis (Sanskrit: Sages) who meditated and lived at a place now known as Sapta Rishi Ashram in Haridwar. Incidentally, a group of stars much known in India is Sapta Rishi (Sanskrit: Seven Sages) which in the West is known as ‘Big Dipper’ or ‘the Plough’. The Western equivalent of star Vashishtha is ‘Mizar’ (Bayer designation: Zeta Ursae Majoris). 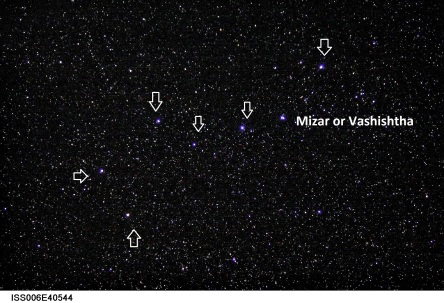 Mahabharata: While the four Vedas are the primary scriptures, the masses in modern India, in their daily lives, relate with two ‘modern’ (but also circa B.C.) scriptures Ramayana and Mahabharata. The latter was compiled by Ved Vyasa who was son of Parashara, in Haridwar. A portion of this book is called as Bhagvad-Gita (Sanskrit: Song of the God) which is conventionally used across India for taking oaths by citizens in courts etc. In that respect it can be considered equivalent to the modern Christian Bible.

Astro-logy & astro-nomy: About 50 miles upstream lies an observatory established by  Acharya Pandit Chakradhar Joshi in 1946. He was an astrologer of repute. The first President, and some later prime-ministers of India visited him. It has thousands of books and scores of manuscripts on the subject. The place is now in disrepair.