“The art supplies and studios were more than I expected. Helpful explanations and education schedule (of Yoga and meditation).” 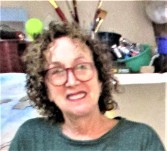 Her career has circled around creativity in many ways – originally as a graphic artist and later as a consultant to this industry. She has that found she is most rewarded when she is helping others succeed in their own goals, especially when they are creative. Barbara is the President, The BlueShift Communications, Inc., USA.

Some art-works created before coming to AZIMVTH 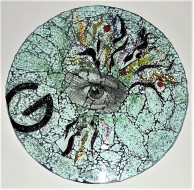 Image / file 1 title: Untitled
Description: Glass, collage, glitter, grout.
This was designed to sit above a light which creates an effervescent feeling. It was designed for her son, and intended to emulate his creativity, intelligence and his “self”.

Description: A mixed media piece including a T-shirt, collage and paint. It was intended to personalize humans’ responsibility to protecting the earth (it’s elements) and avoid it’s threatened destruction (fire).

Description: A mixed media piece including glass, mirror, stones, crystals, paper, key. This was created as a modern interpretation of ancient Jewish marriage certificates. This piece recognizes each individual as equals and comments on their commitment to each other. 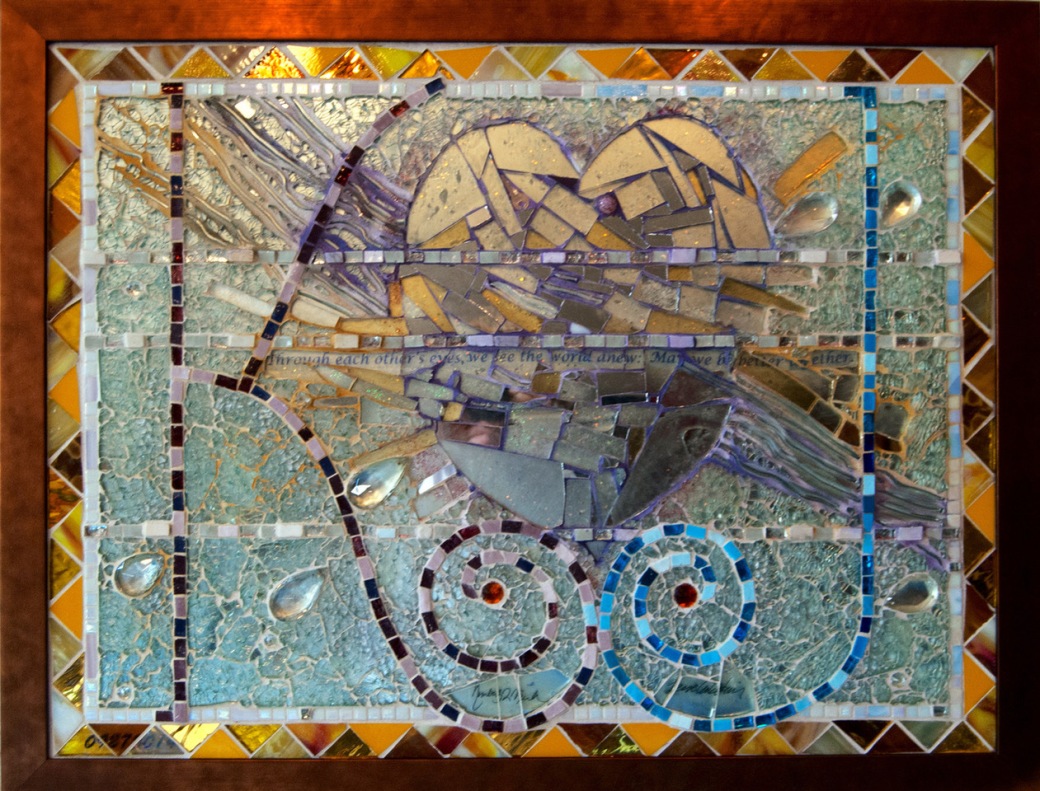 Recently, on the plane heading home after the funeral of her mother, Barbara watched a documentary about Picasso. About his painting of Guernica. For some reason, it reminded her of an old inspiration to address the issues of aging. She thought of doing a research based art residency that could be a tribute to her mom. The concept of death became the residency focus for Barbara.

What are the beauties and challenges of aging?

Perceptions – becoming invisible, seemingly useless, a burden, a money pit, loss of mobility, pain, loss of will to do, being feared by the young, difficult communication, hearing, seeing, writing.

On the positive side – legacy established, wisdom (until dementia sets in), being loved, joy of being with those you love, knowing you are cared for memories, providing purpose to caregivers.

How do Indians deal with death and dying? What are the colors of death? How are the aged cared for? What are there options in their old age. How to describe it? No judgment. Just facts to ponder. How is death acknowledged throughout the world? (Goal might be to make it less frightening. Almost something to look forward to.) Could it be renewed freedom. Becoming unburdened.

Barbara had an eventful residency. Private audiences were arranged for her with senior functionaries of 2 of the largest spiritual / Yoga institutions of the world. She participated in a lot of relevant discussions at AZIMVTH. And listened to audio-books. She was trained in Mantra chanting and breathing Yoga.

Project A: One Torn Shroud and Five Elements

Barbara used a hand-made cotton fabric and made an art work on it. It shows 5 nodes that can loosely be correlated to the 5 elements of nature – fire, air, ether, earth, and water. 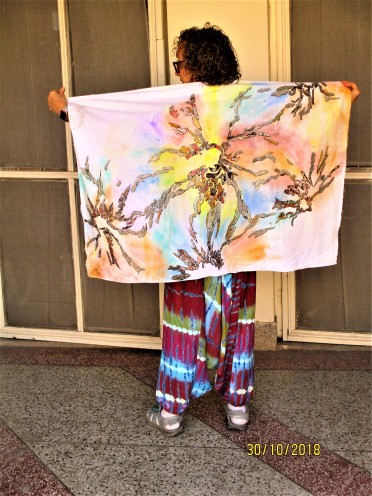 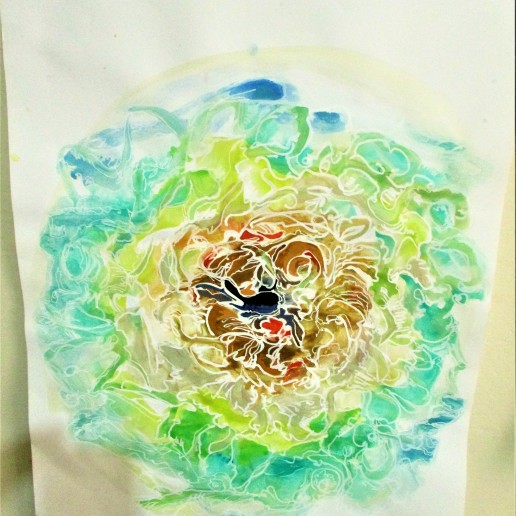 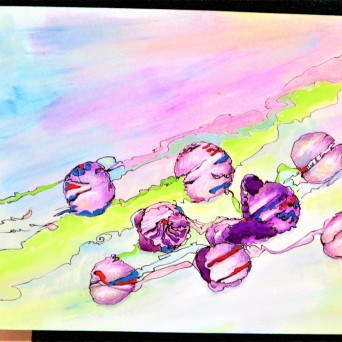 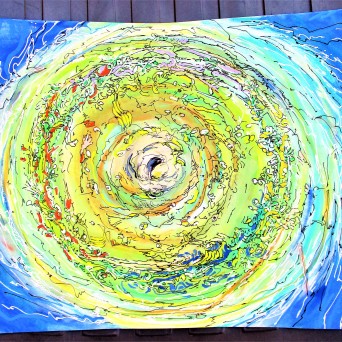 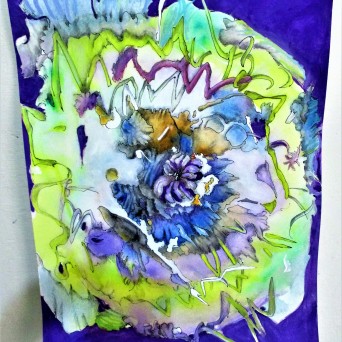 Project B:  The Eglin Marbles

Barbara considers eggs to be the beginning and death to be an end. As it is illegal to trade in / consume non-vegetarian food (that includes eggs) in Haridwar, she obtained 3 marbles – pieces of stone that become rounded by the continuous embrace of mother river Ganges. 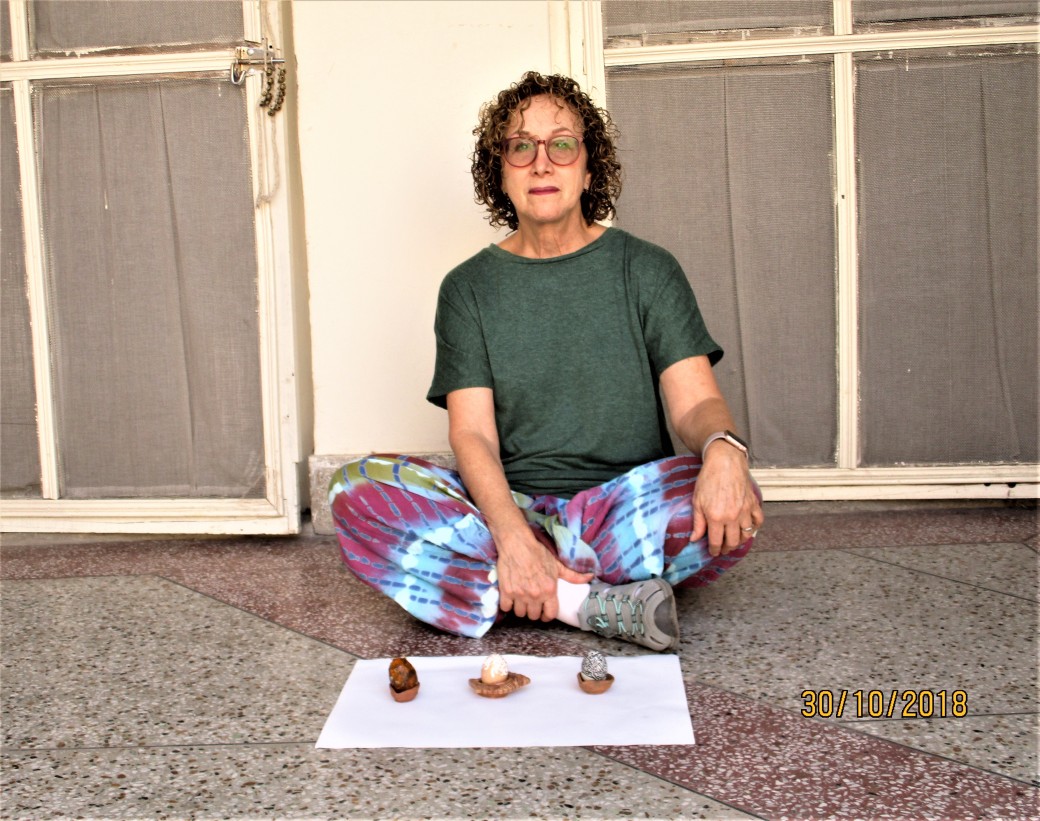 At AZIMVTH Ashram, Barbara trained in chanting the mantra of Aum. The mantra helps in inducing peace and rejuvenating creativity. Following is a recording of 108 chants.

During the extended stay in India, Barbara also visited other cities besides Haridwar. While in Udaipur, she stayed at the famed hotel ‘Taj Lake Palace’ where some scenes of the James Bond movie Octopussy were shot. It was a coincidence that a Bollywood Hindi movie ‘Dolly Kitty Aur Wo Chamakte Sitare’ was being shot. She got an opportunity to play a small extra role. A lead actress of this movie was also the lead actress of another movie ‘Dum Laga Ke Haisha’ that was shot almost entirely in Haridwar. Of course, this wasn’t any planned project!

Barbara donated to AZIMVTH Ashram the following – a copy of The Pentateuch Haftorahs that was presented to her husband in 1962 on his Bar Mitzvah, 2 menorahs, 1 Treidel, 2 of the 5 art works of the project ‘One Torn Shroud and Five Elements’, and 2 art-works of the project ‘The Eglin Marbles’.

Impact and Next Levels

Since she has explored many divergent yet related paths in her work, during the time (at residency) Barbara liked to further develop her mixed media explorations, incorporating elements from her environment into the works and found the relationships that tie humanity together.

She expanded subject matter, although with an abstract sensibility to reflect her experiences and learning while at 365 Haridwar. She expects that the spiritual aspects of this experience, the community and the environment will open many doors she has yet to discover.

As a life-long learner and concerned citizen of the earth she hopes to gain increased awareness of the needs of her fellow man and find a way to help make the world a better place.

Barbara expects she will be able to offer more value as she goes forth in teaching about art and how it effects humanity.

She feels that every experience offers growth. The 365 Haridwar experience will open new opportunities for other residencies, offering that much more opportunity to use her art to spread the message of peace and understanding.

She has, for many years, been a docent volunteer at a few museums in her community. This has provided a broad perspective for her. Not only about historic and contemporary artists, but also about the impact of the arts on events and history and vice versa. In addition, she has had the opportunity to educate adults and children about the above and seen them light up with curiousity, creativity and excitement. Barbara intends to continue this effort after 365 Haridwar with an enlarged perspective that she can foster. 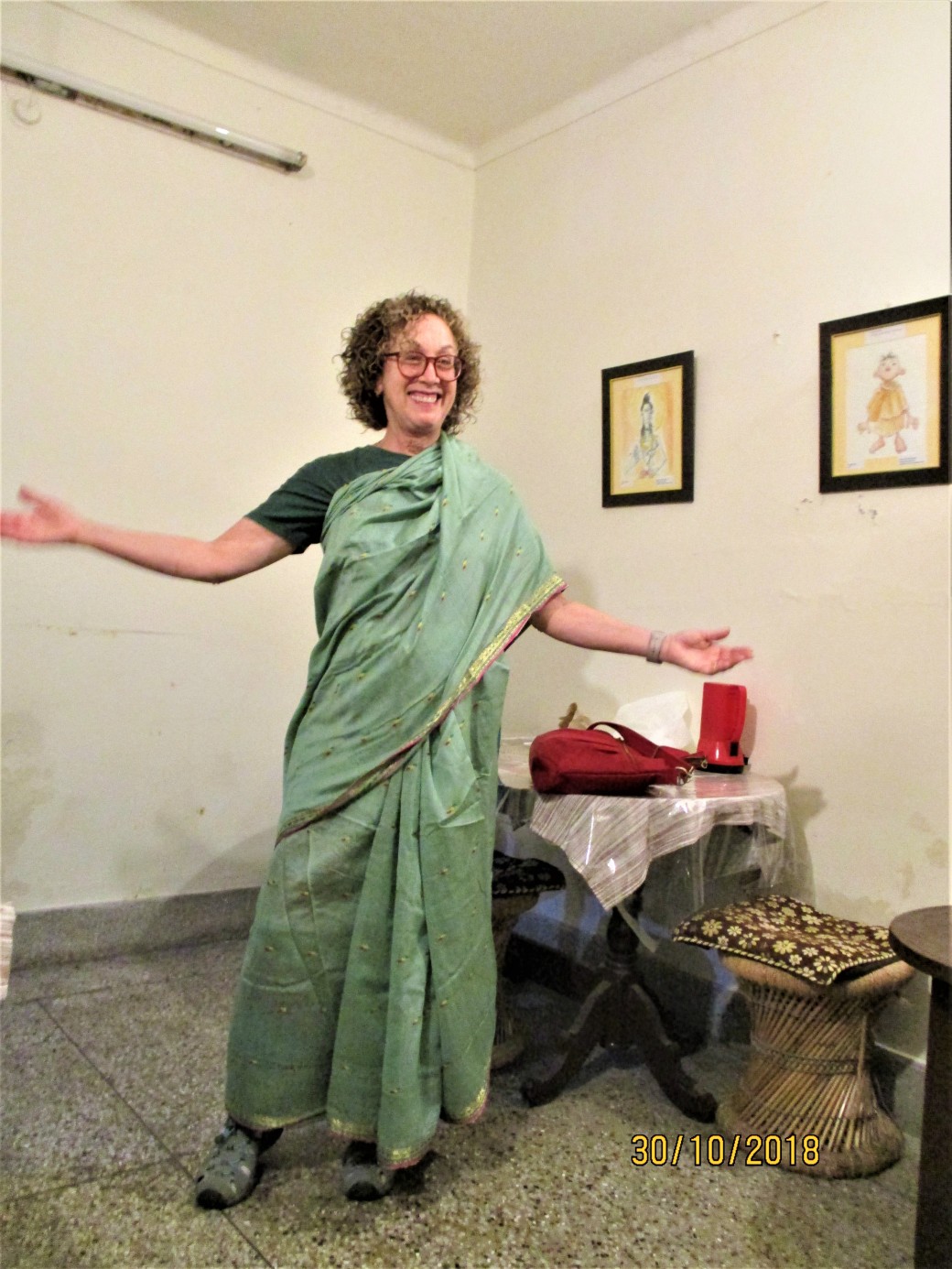 “Thank you for your guidance and knowledge, loved the translations, visits, everything. I feel like I got an authentic experience here in India. I learned much more than I would have in a hotel.”

“Mostly – with your education and the environment I felt inspired and more productive than ever before. Also – I feel it will continue.”

“I also am more relaxed than I’ve been in a long time.”