The night following the fortnight of remembrance of ancestors marks the beginning of a nine nights festival known as ‘Nav Ratri’. The festivities can be considered to be a cluster of 3 festivals viz.

The nine nights of Nav-ratri celebrate and honor the nine different subtle and deep manifestations / aspects of divine-mother known as Nava Durga. Each day is celebrated in the name of nine different goddesses, all different forms of Goddess Durga. These are –

In Kolkata and East India, this is the biggest festival of the year. It is known as ‘Durga Puja’. Communities set up large statues of Durga and carnivals are held each night. The last evening sees immersion of Durga in rivers. In West India also, it is a large festival. Each night people, in urban communities as well, do group dances known as ‘Dandiya’.

In Haridwar and north India, Nav-Ratri is a festival of prayers. People keep fast all of the days. On the last day, little pre-puberty girls are invited homes in the belief that they are forms of Goddess Durga. Their feet are washed respectfully and they are served full meal and delicacies.

(Images above: Little Goddesses Being Offered Meals at AZIMVTH Ashram)

While fasting, prayers, and meditation happen during the day-time, communities enact stage drama each night. It is about the life of Lord Rama. This tradition is known as Ramlila. The story progresses each night and is played in make-shift stages at about a dozen different and independent places in Haridwar. Local shop-keepers and common-folk transform in to divine beings during the nights as they play the characters of Ramayana. These performances start at about 10.30 pm and last well in to late nights.

Also known as Vijay-dashmi, Dussehra is celebrated on the tenth evening. A large effigy 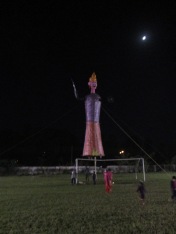 of Ravana, filled with crackers and fire-works, is burnt. Each community that organises Ram-lila has its own Ravan burning event. This marks the culmination of the ten-day festivities of fasting, praying, meditating, dancing, and celebrating.

Lord Rama vanquishes evil Ravana. Now he will return back to his kingdom of Ayodhya. People start cleaning and decorating their homes, neighbouhoods, market-places in anticipation of Rama. The tradition continues and this is the time for the annual big cleaning of homes. Lord Rama will take twenty days time to reach back. That day is known as Diwali or Deepavali.