‘Stone’ in Greek language is ‘petros‘ and the names Petra and Peter are dexterously correlated by Dan Brown in Angels & Demons when he develops the plot centred at St. Peter Square in Vatican City. 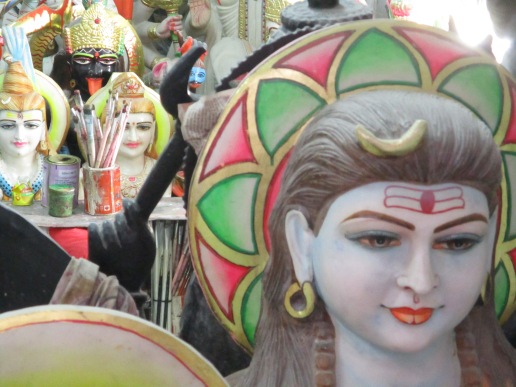 The Sanskrit language word for stone is ‘prastar’ and the Hindi language word is ‘pathar’. While Brown divines stones via St. Peter in the Vatican City, artisans in Haridwar craft stones and join the process of divining them. The Greek petros is quite similar sounding to the Sanskrit prastar. 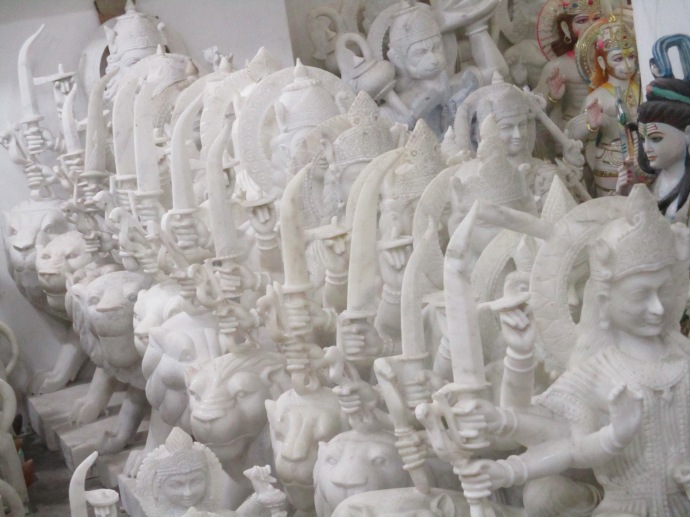 In the touristy bazaars of Rishikesh, and also Haridwar, the front-lanes are lined with shops selling souvenirs including small statues of deities, made of metal, wood and other materials. These are easy to pack and carry away. But, the large statues of deities of the kind that occupy the sanctum-sanctorum of countless temples in the region are not available at these shops. The simple reason is that tourists and pilgrims would not buy large and heavy stone sculptures. Also, these need work-shops rather than just retail-shops. 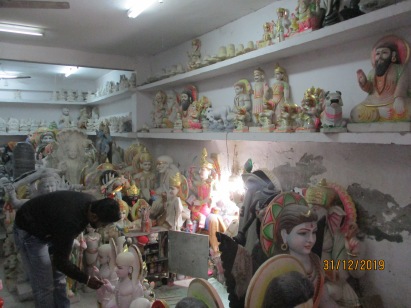 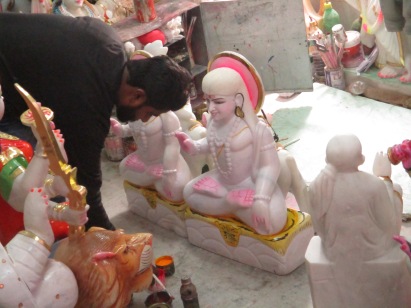 Haridwar: a regional centre of sculptures

A particular area in the Moti Bazaar of Haridwar is the regional centre for the statues of deities. There are several work-shops in the by-lanes hidden from the main streets and lanes. Roughly hewed stones — marble, sandstone, and granite — in the shapes and with iconography of specific deities are commissioned by these work-shops. The rough shapes are cut in stones in the western state of Rajasthan.

Local artisans in Haridwar process these shapes with fine contours. The surfaces are smoothed with a variety of hand-tools, cleaned, polished, and adorned with appropriate colours.

Each statue would go to be installed in one temple or the other and worshiped by hundreds everyday. So many of rocks / stones have been shaped in to divinity by the local artisans over the years and millions have gained by worshiping the resultant deities in the temples all over India, and perhaps in some other parts of the world as well. 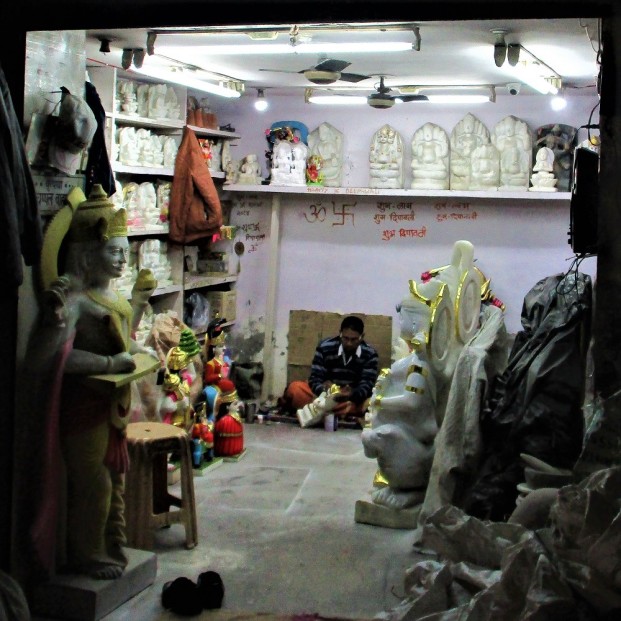 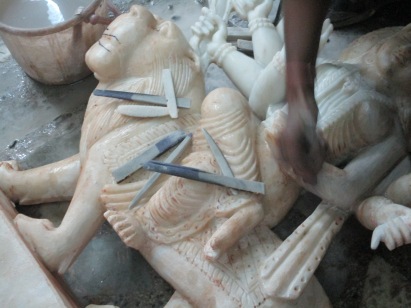 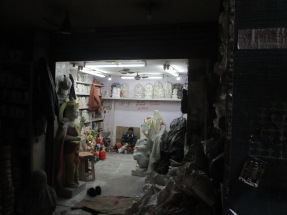 An example can be given of eyes. The workshops receive the figures with no eyes. Artisans in Haridwar chisel eyes in to them. Eyes are windows to soul.

Although the process is basic, chiseling eyes is symbolically important. In the year 752, roughly thirteen hundred years ago, an Indian priest named Bodhisena was invited by Emperor Shomu to perform the key ‘eye-opening’ ceremony of the new Buddha statue at the Todai-ji temple at Nara in Japan. With a weight of 500 tonnes and height of 15 metre, it is the largest bronze (and gold) statue in the world. The project nearly bankrupted the Japanese economy that time. The eye-opening ceremony was grand: 10000 monks and 4000 temple-dancers were present. In front of a huge, cosmopolitan gathering that included ambassadors from Persia, Korea, Vietnam, China and Central Asia, Bodhisena painted the pupils on the eyes of the Buddha statue, inviting the spirit in to the sculpture. The place is a UNESCO heritage site. 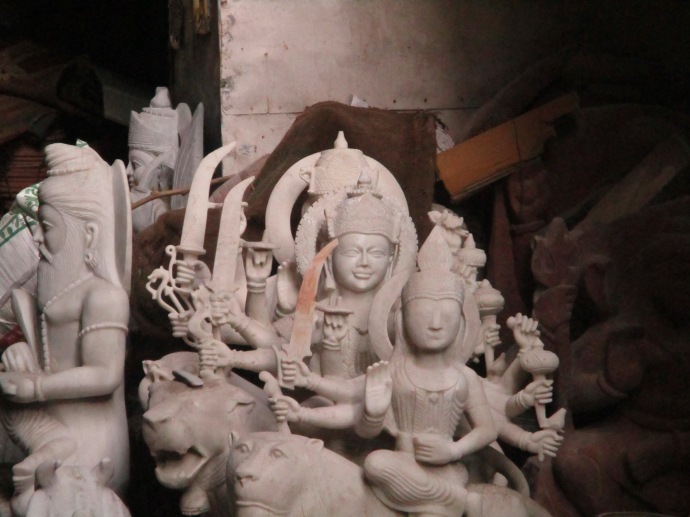 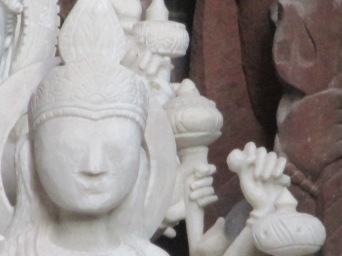 An equivalent ceremony for temples in India is known as ‘prana pratishtha‘ or ‘installation / invocation of prana‘ in a new statue in a temple. After that the stone (or other material) is available to be worshiped and prayed to.

Solitary statues on the banks of Ganga

In Haridwar and the region, one may come across stand-alone statues of deities on the banks of Ganga. Not all of them are shrines. If a statue gets damaged (khandit) then it is to be substituted. The damaged ones are brought to Ganga.

The most ancient scripture on Yoga by the one-toothed Ganesha

However, not all ‘damaged’ statues are inappropriate. The iconography of Ganesha is such that one of his tusk is always depicted as broken. The reason is that when Sage Vyasa petitioned Shiva seeking help with writing Bhagvat-Gita, Ganesha was presented as scribe. Vyasa would dictate and Ganesha would write. Ganesha broke one of his tusks to fashion a pen. Vyasa lived in Haridwar. Incidentally, Bhagvat-Gita contains more references to Yoga than Patanjali’s Yoga-sutra.

(Read more about this in the article ‘Gita Jayanti and The Agile Vajra of Yoga’ available here.)

Almost all sculptures are statues of deities. Some are also of animals like elephants and of leading personalities.

A suggested itinerary for this walk is like this. Rendezvous at Har-ki-paidi. Walk downstream on the right most bank till about 100 metres. One comes across a small non-descript Gurudwara, the place where the incident of Guru Nanak offering Ganga water in the opposite direction happened. It is part of the Tehri House.

Find your way to its backside. One comes across a work-shop with statues undergoing various processes. The place is managed by a third-generation keeper. 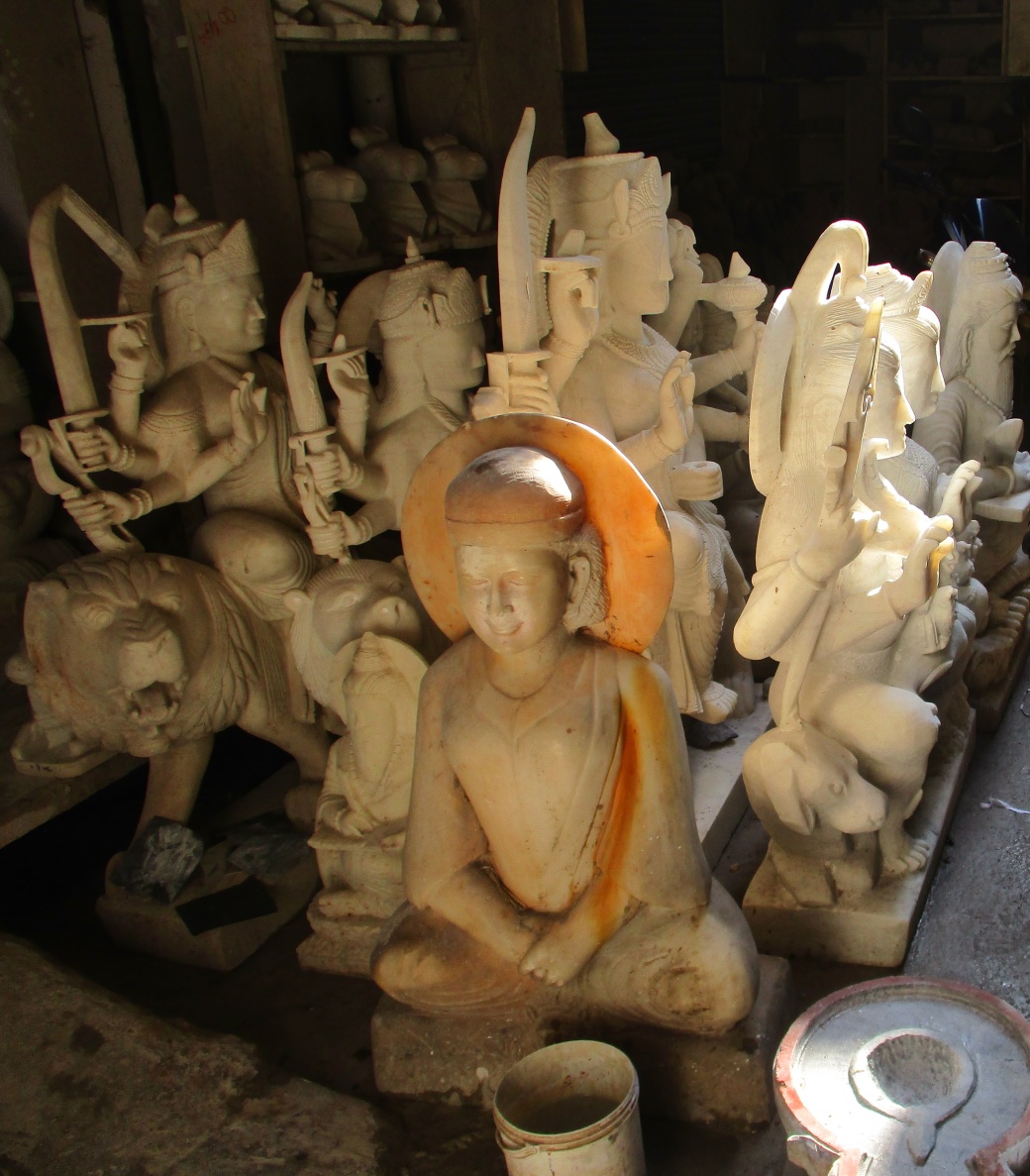 Coming out, one immediately comes across a fork in the lane.

Take the right side and walk for about 300 metres, crossing Thanda-kuan (cool well). To the left is an archway leading to Ganesh ghat. Immediately inside are couple of shops selling the statues. Crossing a few more archways, the narrow by-lane opens into the refreshing Ganesh ghat. One may see an old haveli with faded murals.

Coming back to the first archway, one may go to the opposite side which is known as Mansarovar compound. There are a few more workshops.

One is reminded of a 1964 Bollywood movie — Geet Gaya Pathar-on Ne — The Rocks Sang a Melody, a musical-romance story of a poor temple sculptor. A song from the movie is shown below.

But there are some who can make a rock sing a song (of a kind as enunciated in Bhagvat-Gita or Song of the God) yet can not themselves hear it. One of the key sculptors at a work-shop is deaf and can not speak.

Pressing further up one comes out into the Upper Road. The left side leads to the railway station and the right one goes to the Har-ki-paidi.

The walk will take about two hours time.

(On a similar theme, Chareiveti, the spiritual walks project of AZIMVTH, in partnership with India Heritage Walks, conducted a walk with nine participants most of whom were photography buffs, titled ‘Of Statues and Sculptures- Exploring Har-ki-paidi in Haridwar’ on 19th January 2020.)